Could Trump's bid to build more cars in the US drive up recalls?

Trump’s protectionist plans could have unintended consequences for the US auto industry, argues Hiscox's John Naughton.

Since his election as president, companies are wondering if Donald Trump will follow through on his very bold campaign promises on boosting economic growth by returning manufacturing jobs to the US as part of his ‘America First’ policy.

So far Ford, GM and Fiat Chrysler have all been singled out by Trump for their decisions to invest outside of the US economy.

In particular, the automotive industry was a big campaign focus. "Car companies and others, if they want to do business in our country, have to start making things here again. WIN!" read a tweet from Trump as he has sought to persuade car makers to return their manufacturing to the US. So far Ford, GM and Fiat Chrysler have all been singled out by Trump for their decisions to invest outside of the US economy. In each case, the company has since reversed its decision.

Could Trump’s drive to ensure these companies build their cars on US soil have an unintended consequence on quality, costs and the number of recalls?

The US auto industry has always played a large role in the the US economy. It directly employs 1.55 million Americans and indirectly impacts a total of 7.25 million US jobs (or about 3.8% of private-sector employment), contributing 3% to 3.5% to America’s total gross domestic product (GDP), according to the latest Centre for Automotive Research report (2015).

The industry’s importance to the US economy is not lost on Trump, who has already fired the first salvos in his bid to return manufacturing to the US. Take his views on Mexico, for example. Mexico was starting to play a core role in many US car manufacturers' plans, whether sourcing component parts from there or physically relocating production lines to the country. Many of these plans have now been reversed.

Trump's scrapping of the Trans-Pacific Partnership (TPP) trade deal is another example of his efforts to protect the US auto industry. According to Trump’s campaign website: "The TPP lowers tariffs on foreign cars, while leaving in place the foreign practices that keep American cars from being sold overseas. The TPP even creates a backdoor for China to supply car parts for automobiles made in Mexico."

We may actually see a rise in component manufacturing in countries like Mexico to compensate for the fall in car assembly investment.

An interesting point that many have missed is that Trump’s main focus has been on the car assembly plants, not about where the component parts were produced . Trump may just assume these parts will now be made in the US, as any imported parts will be subject to tariffs. Alternatively, Trump might have cleverly focused everyone’s attention on his big campaign promise (keeping assembly plants in the US), but let the US auto industry maintain some competitive edge by allowing it to source parts from more competitive overseas markets. If this is the case, we may actually see a rise in component manufacturing in countries like Mexico to compensate for the drop in car assembly there.

This could have a couple of interesting consequences. Firstly, the carmakers will be trying to reduce costs to pay for the higher price of assembling cars in the US, which could mean they will be looking to their component manufacturers to share some of that pain. So, it is possible that carmakers will be more aggressive in their contract negotiations with suppliers (US or foreign) and will be more likely to impose stricter contractual terms for errors in manufacturing affecting the auto maker’s brand. Until now, many car manufacturers have been willing to share some of the costs when a recall has occurred as a result of a faulty component. Suppliers have also often managed to negotiate out their own purchase of product recall and liability insurance. Expect this to change as the car makers look to reduce their own liabilities.

It is possible that car makers will be more aggressive in their contract negotiations with suppliers (US or foreign) and will be more likely to impose stricter contractual terms for errors in manufacturing affecting the auto maker’s brand.

Carmakers will squeeze costs out of the parts they buy, to compensate for their increased costs from building vehicles in the US. This could mean that errors start to creep into the production chain, as manufacturers look to reduce their own costs by using different materials or reducing quality checks, for instance. This costcutting could lead to an increasing number of manufacturing errors and recalls.

The result could be a growth in demand for insurance cover from the component suppliers, which can no longer rely on their customers to share the cost of failure or negotiate the cost of insurance out of their contracts. Insurers will however need to be cautious that deteriorating quality standards don’t negatively hit their own balance sheets by continuing to price their insurance appropriately.

In the short term then, expect to see the US auto industry flourish. But, history tells us that protectionism inevitably succumbs to pressure from factors such as inflation (the average costs of making a car in the US will rise), trade unionism (the auto industry is heavily unionised, which means that salaries and jobs are generally protected from any external factors) and global competitiveness (with the US breaking current trade deals, there will be taxes imposed on US cars exported to other countries).

John Naughton works in the Hiscox Product Recall Team within London. The Hiscox Product Recall Team has designed their own wordings to meet the contractual and business needs of the automotive component market. Having one of the biggest product recall teams in London, means clients will receive a fast pro-active response, while also benefiting from Hiscox’s award winning claims service.

Recall cover for a wide range of industry sectors from food and drink and pharmaceuticals to consumer durables and automotive manufacturers.

Learn more about the semi-conductor shortage. 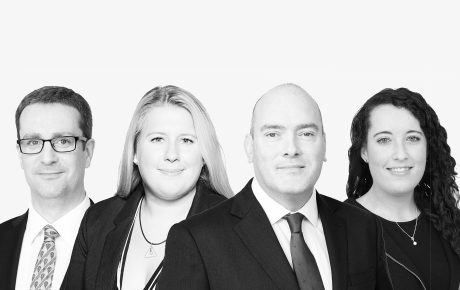 60 seconds with… the Product Recall team